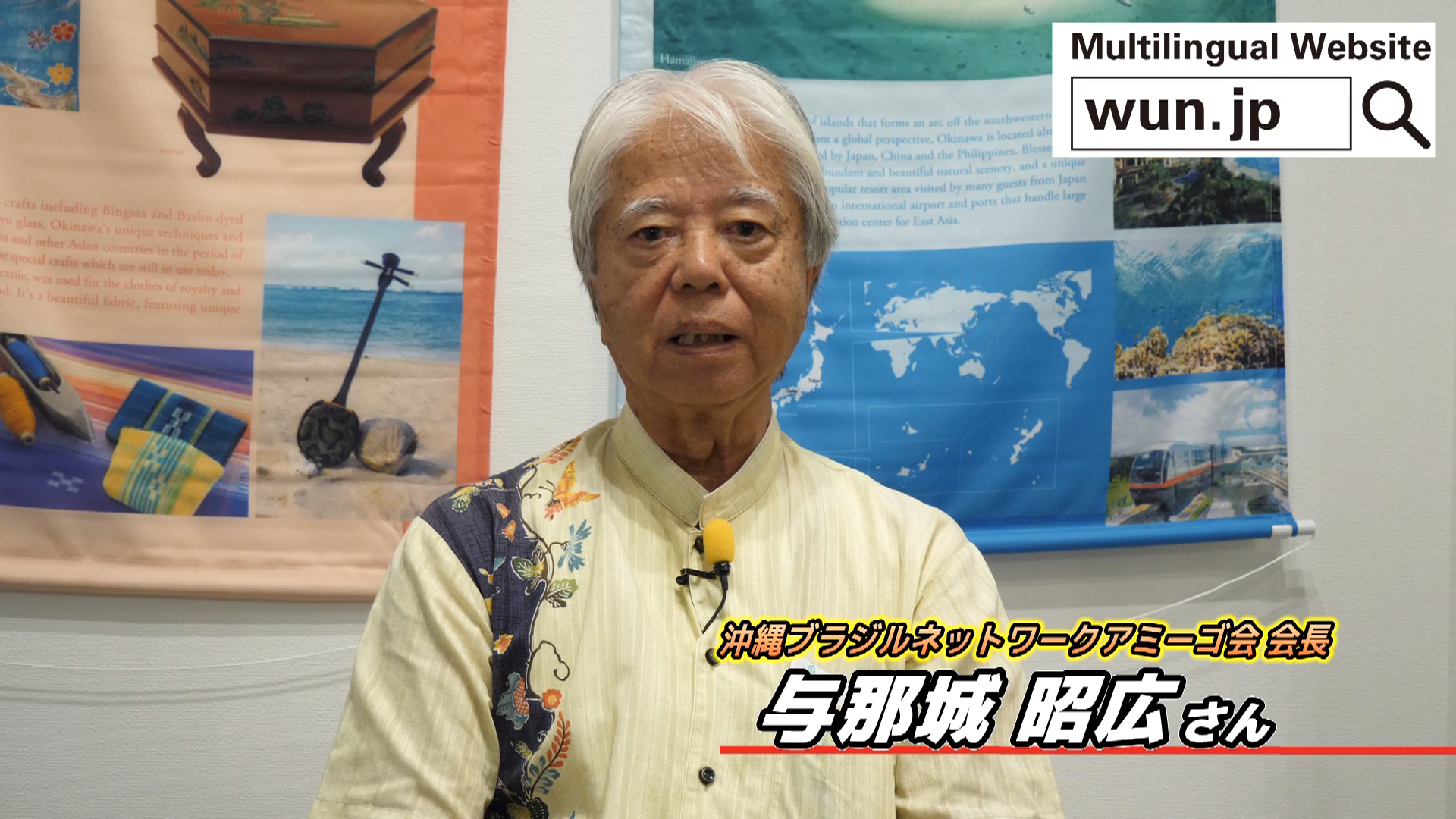 My name is Akihiro Yonashiro. I was born on the southern outer island of Aguni. After I finished university, I entered into the Okinawa Inter-Oceans Service which I now work as representative for. At the time, it was before Okinawa was returned to Japanese rule, various organizations presidents would come from South America, to Okinawa. At the time, I would show them around and take them here and there. Basically, I was like a driver. Because of that, I would often hear, their personal, and deep stories. However, most of my customers where old, and so the pay was pretty low. But, there was a lot of human interaction. I often thought of my client’s position, and how many were quite sensitive situations. Because of that in the end I ended up not quitting, last year was the 120 year anniversary of Brazil, Agential, Bolivia and it is a turning point. I have visited Brazil 23 times, As well as, Argentina Bolivia, Peru, and until now and I have continued to do a job connected to South America.

My work in Brazil is, well as you know there are exchange students sponsored by the prefecture. From the 1st group, to the now 35th group, I did all of their acceptances. Based on this relationship, with the about 75 1st generation of students, there are connections between them and students who are currently here, like today, or like on Brazilian Independence Day on September 7th. Around then, there are Independence Day parties, at various municipalities for all research students and all the prefectural sponsored exchange students. It is not just exchange with each other on the human level but, currently there is a group called Worldwide Uchinanchu Business Association (WUB), they are of the opinion that, if in the future exchange cannot lead to some sort of physical distribution then it is pointless. I have been working as the Brazil Association as an Executive Director for many years, and going forward I too would like to expand the exchange between young people to include this. For that reason we created the network, and “Amigos Network”, and have been continuing in that vein.

In that same way, Because Brazil is a coffee producing region, I am doing things like bringing organically farmed coffee, as well as the local propolis, and honey, to the office, as well as selling them privately myself. For this reason, even though the training period is short, about 3 to 4 months, for the exchange students sponsored by the prefecture or the research students at the various municipalities, I would like for when they return home to each of their nations, that they are able to get the special goods of their localities in Okinawa, and with the cooperation of their connected municipalities here, in brazil they began to sell these various Okinawan goods. I am actively talking to them, or seeing if I can introduce someone who can do those types of things.

A Message to the Youth

The creation of various association buildings for the different Okinawa Association, or museums and things like that, have always been planned for one another for charity, and go around gaining the cooperation of all of the municipalizes, the box has been made, Okinawa the participation of young people is falling, and 10 years ago at the 100 year anniversary the amount of people in the Okinawa Associations was about 3000, currently the amount of members has fallen 2000. it is all generations, currently all of the board members who were first generation have retired, and now we are lead mostly by second generation, they are currently working hard for their country, Conversely going forward while it is not the Hawaii plaza, we are working to make an Okinawan business center in Okinawa, to have various different exchange events and study sessions one time each month. I am awaiting for it to take shape for the 7th World Wide Uchinanchu Festival in two years, and I am looking forward to what all of you think of for Okinawa.